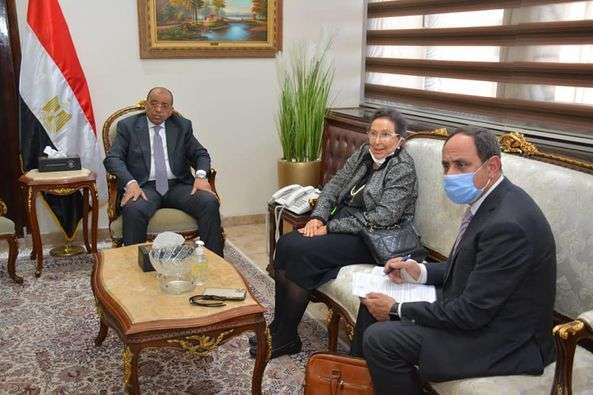 The Minister of Local Development is following up the efforts of the “Irtiqa” company to carry out garbage collection and street cleaning services in the neighborhoods of the western region of Cairo. Shaarawy, Minister of Local Development, held a meeting with Dr. Yusriya Loza Sawiris, Chairperson of the Board of Directors of “Irtiqaa” Company for Integrated Services and Waste Recycling, and Dr. Ayman Muharram, Managing Director of “Irtiqaa” company, in the presence of a number of the Ministry’s leaders. The meeting witnessed the follow-up of work in the hygiene system in the neighborhoods of the region Gharbia in Cairo, which includes the neighborhoods (Mansha’at Nasser – Al-Waili – Wasat – Bulaq – West Cairo – Abdeen – Azbakeya – Al-Mosky – Bab Al-Shaariya), where the company contracted with the governorate to provide all types of services from residential and commercial collection, street cleaning and washing, and public utilities according to the detailed operating plan The company’s delegation indicated that the average amount of waste generated from the neighborhoods of the western region is about The number of workers involved in cleaning, waste collection and street washing operations in the 9 neighborhoods is about 900 workers for residential collection and 1935 workers for sweeping and street cleaning, and the total number of cars, equipment and tools used to provide services is 31,072, including 435 cars. And 37 equipment and 30,600 tools, including (containers, manual collection carts, brooms, forks and uniforms). During the meeting, the Minister of Local Development directed the “Irtiqaa” company to increase awareness campaigns for citizens, passers-by and shops in the neighborhoods and areas in which they work, with the increase of garbage “baskets” in the main streets of some areas and increasing the process of manual and automatic sweeping and washing streets to achieve citizens’ satisfaction so that they feel that there is a difference in the level of street cleanliness. Major General Mahmoud Shaarawy also called for continuous attention to the system of residential and commercial collection of waste in all neighborhoods to reduce the rates of waste access to the street and the full spread of employment and the commitment of workers to wear the agreed uniform Accordingly, as indicated by the Minister of Local Development, that a contract is underway with the “Enviroddet” company to carry out operations Monitoring and follow-up of the two companies “Irtiqa” and “Enviromaster” for waste, which carry out cleaning work in the eastern region of Cairo as an independent third party through an electronic system, as well as continuous follow-up from the Ministry of Local Development and the Governorate. The Minister stressed that street cleanliness is the main criterion in evaluating the work of new companies in Cairo. To obtain citizens’ satisfaction in the neighborhoods in which it works. “Sharawy” indicated that President Abdel Fattah El-Sisi and the Prime Minister are constantly following up on the new solid waste system in the capital so that the citizen feels the continuous improvement in this service that affects his daily life and the return of the civilized face of the capital. The delegation of “Irtiqa” company also indicated the arrival of a number of modern equipment and machines (cars, vacuum cleaners, etc.), which were imported from abroad to work in the hygiene system in the neighborhoods of the western region during the coming days, which will positively affect the performance and the citizens’ feeling of a greater improvement in the level of cleanliness. The company’s delegation praised the support and cooperation provided by the Ministry of Local Development and overcoming any obstacles or challenges it faces in implementing the terms of the contract, restoring the civilized image of the capital and changing the current image in the areas in which they work.